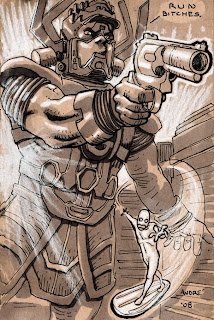 Been working on some stuff lately. Trying to decide about where to go in my comics career. It's an exciting sort of cross-roads I guess. I'm still working on Groove Junction, although as usual, much more slowly than I should. I have a neat idea for a cover. At least I think it's neat.

Also, don't forget to order Comic Book Tattoo (that Tori Amos thing from Image comics). I think it comes out next Wednesday, July 23rd. I have a 9 page story in it.
Posted by Andre Szymanowicz at 7:49 PM