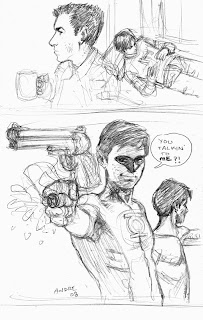 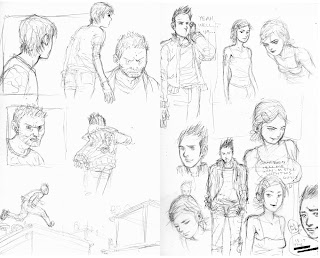 Well I'm happy to announce that Paramount has acquired the rights to make Groove Junction...into...a... No wait a sec, that really was just a dream I had. And it wasn't me, it was Paul Pope's Battling Boy. And it actually really happened.
Here are some recent sketchbook doodles. Everytime I finish a comic, I can't go right into the next one. I'm not happy about that character trait. Introspection and lack of confidence in my work always rule over any productivity I would like to apply. This is usually accompanied by long strings of movie watching and going to bed early.
A couple favorites I re-watched were Rocky I - IV, Taxi Driver and The Graduate. Also the best TV series ever to grace a screen only to be cancelled after one short season, Firefly. As I watched all 14 episodes, I loved it even more than the first go-around. Gotta go pick up Serenity also, as the last time I saw it was in the theater.
I know I've probably said it before, but now is really the time for me to start working hard and not let up till after February. Since I found out I have a table(well, half a table) at the NYCC, I had better be ready with more material. Yes, I'm talking about the "year and a half later" Groove Junction #2. Cross your fingers!
Posted by Andre Szymanowicz at 12:03 PM

Cool stuff all around, Andre! Love the colored scketches.