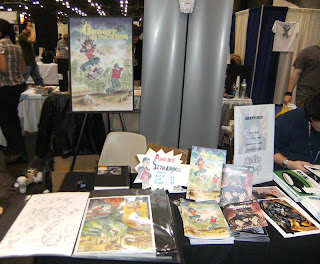 Its one week after this thing has ended and I finally feel like Ive caught up on sleep and can get back to a regular work schedule. It sounds weird, but its true. Usually these things just take it out of you, but New York was a real mother of a con. These pics were from Friday, when it was a little less busy, but dont be fooled by the amount of people you see here. When Saturday hit, it was wall to wall bodies and half hour trips to just get back and forth from the bathroom. 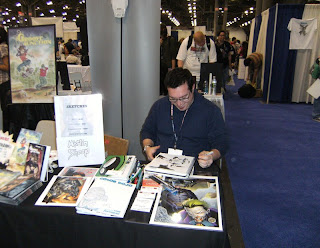 Marlin Shoop shared the other half of my table. He sold a lot of those Batman/Joker prints. People were going crazy for them. He also was pretty much constantly busy doing commissions.

One thing I wanted to mention was that finding a price for commissions is very tricky. When we first sat down, Marlin and I talked about it and decided that according to the size and cost of this con, we should both charge a certain amount. It also had a little to do with how much the people around us were charging. Those certain artists had a lot more experience, but the price we arrived at seemed right. Half way through Friday, we started to realize that maybe it was better to lower that price and get more commissions than it was to charge a large amount and get only a few. I think it turned out much better and it made certain we were drawing non-stop. So this is how that looked: 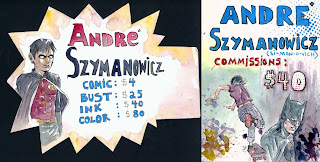 Also, Simon if you are reading this, please send me an email. I feel bad that I changed my price after I did that piece. So if you get me your address, I will send you some stuff that I am sure will make up the difference! Just do it ok! :)

Here are a couple I did on Sunday that I actually remembered to take pictures of. You might recognize the first one that I copied from Blade of the Immortal. I wouldnt usually copy stuff straight up like this unless its exactly what was needed. I gotta say I learned from doing it too so hopefully there's no harm in that? And the second one was for a dad that wanted his son as Naruto and him as Kakashi. Both were really fun to do! 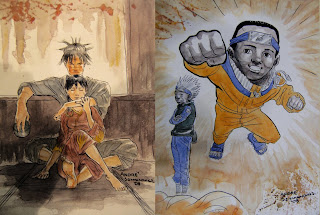 In the end the whole thing was an amazing experience. I met so many cool people. (I even lost my voice on Saturday from talking so much! The next day I sounded like Barry White and every so often it would crack and sound like a duck with terrets) Thanks to everyone that stopped by if you are reading this! I hope to see and talk to you all again!
Posted by Andre Szymanowicz at 6:32 AM