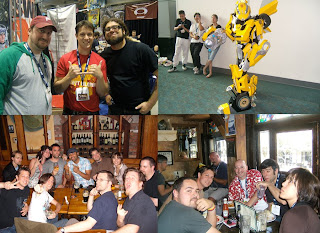 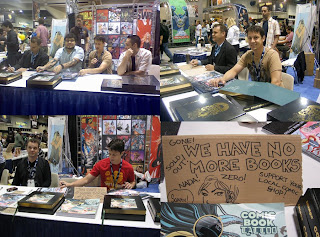 Where to begin? For starters, I didnt know I would be going till the Wednesday right before the con, or technically the day it started. My good buddy at work Kim, saw Comic Book Tattoo and was nice enough to say "dude, you're going". I was on a flight the next day!
I got there and didn't expect much since it was so last minute notice, but Rantz, my editor let me do an early signing each day. That was a total blast. I kept thinking, if I dont ever do anything bigger than this in comics, at least I'll have this moment. It was so much fun seeing people line up in droves to buy Comic Book Tattoo and ask me what story I did. We finally got the softcovers on Friday and they ALL SOLD OUT Saturday morning I think.
The rest of the time, I met up with my good buddy Ken who is a former Kubert school alum, graphic designer (he did my GJ logo by the way) and had just moved to California. I also got to hang out with Gabe again which was a lot of fun and he let me crash in his hotel the first night. Charmaine and Jho were there and it was awesome to see them again after last year's Wizard World. Also got to meet Kevin from the Void boards.
Later on we met up with another my old Kubie buddies, Geoff, and his girlfriend Dana. We were going to go to Ghiardelli's for what I'm told is the best ice cream on the planet, but sadly we didn't have time.
I ran into Tagg and Bert from the youtube channel, ONE SHOT PRESENTS. Those guys are so nice. You all need to check out their awesome comics reviews. They are so creative and witty all the time and they have this slick chemistry that only comes from people that have been friends for years. I've seen a lot of comics review sites that are so hard to listen to, but this one is top notch. I wish I had more time to hang out with them. They were also nice enough to follow up and do a quick interview with Sheldon, Justin and I.
It was good to see Justin there too. He had to head back early though so no partying this time.
Since it was so late notice, this con was so unplanned. So Sheldon let me crash with him and his girlfriend and some of their buddies for the rest of the time. Sheldon was pimpin like crazy, hanging out with Claudio and Chuck from Coheed and Cambria. He introduced me to them since Ive been a big fan ever since I heard A Favor House Atlantic.
He also introduced me to the dudes from the Zuda online comic, Black Cherry Bombshells. Tony Trov and Johnny Z and their friends were awesome dudes to hang out with on the last night. We partied pretty hard, or at least I did a little too much :P Those late nights really catch up when you get home.
Some of the coolest books I picked up were an art book by Robert Valley, Mesmo Delivery by Raphael Grampa and Pixu, by the same gang that did the eisner winning "5".
So I made it home, tired and much lighter in the wallet. I just hope I can do even better this year and have it pay off when I go back again.
Posted by Andre Szymanowicz at 8:28 AM

That night is a blur but I do recall you making a sweet three pointer.

Yeah! I made two! I remember the look of awe in the face of this one small boy.

My back was to the whole thing. The bartender was really making fun of me hardcore.