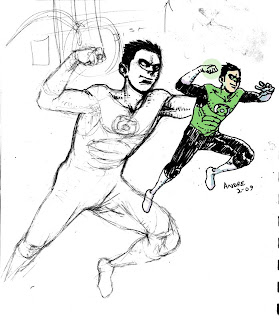 Hey there. Just a quick note about the con. I'm still alive and it was up and down, but mostly good.
The bad stuff first: What was not as positive as last year was that people maybe just did not seem as into getting commissions maybe. That was noticeable in trying to recoup my table funds. The con people did a horrible job of letting attendees know where everyone was. There was no indication, from what i heard, where to find anyone in artist alley. Some people that were looking for me couldn't find me. A lot of time, the people around my table would bring so many friends to chit chat and do business in front of their small area, that it would just divert the traffic right around me. At one point, the table to the left of me even pulled out a friggin massage table!!? With a million people already crowding in the aisles!!?? Ah what can you do. Obliviously rude is never an excuse.
The good stuff: Sushi Nachos completely sold out early Sunday. Should have made more copies. A lot of people enjoyed seeing the original art for it and commented on how there should be more books in watercolor. Hello!! That's what I think too!! I love that some still feel that way.
It was fun meeting fellow Comic Book Tattoo artists again. Doing the signing was fun as I am not used to just hanging out at Image Comic's booth without like a restraining order or something.
Lastly, there is something that looks very hopeful for me, that I don't want to say just yet. I am working on the early sketches for it and I pray it just works out beautifully. I'll say more when I feel it looks like its working out.

I did not get a chance to take any pictures besides the crappy camera phone pic you see below. Forgot my digital camera. :(

That sketch up there is just one of those little free time doodles I did at my table in my sketchbook. Since I forgot it at home, I'll post a better scan tomorrow, of that Supergirl table sign you see below. I'll also show a much nicer pic of my Groove Junction 2 cover.
Posted by Andre Szymanowicz at 7:12 AM