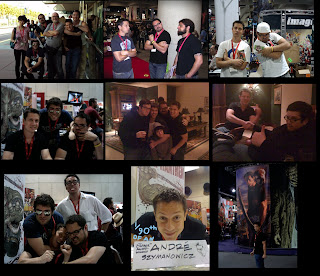 Just as a small disclaimer, I did not take that many pictures this time around. I always feel that next year I will record every moment for the voyeuristic pleasure of whomever may read this. So... next year then?

Ok lets do this thing.

I met up with Sheldon, Gabe, Niki, Justin(Moritat) and Richard at a Chinese restaurant the first night, right after getting lost trying to find it in the gas lamp district. I dont have that fancy iPhone GPS, but man, this trip made a very convincing argument for one.

One of the best things about this trip was spending time at the Elephantmen booth doing sketches with Gabe, Sheldon, Niki and Justin. Watching Justin work so fast and at such quality was just an amazing experience. We all took shifts, which worked out very nicely. There were times, even then, where you would just hit a wall, so it was nice to have someone to give you a break. Richard does some amazing preparation, advertising on bike cabs and all kinds of things to get people to the booth, so it all works together to make a great show.

It was really great to see Tagg and Bert again from One Shot Presents. I can't say enough about how cool those dudes are. I'm really glad we got to hang out more this con and maybe next year their hotel won't be on the border of Tijuana so we can see them even more! :D

That brings me to one of the best things to happen for me personally at the con, and that was meeting my long time comics hero, Mike Allred. Tagg had set it up so that One Shot Presents did a special video segment where one artist interviews another. So one morning, Bert, Tagg and myself came up with some questions to ask before walking up to the man himself. I have to say I almost did not go through with it because of nerves, but once the camera started rolling, it got a little easier. What a great experience!!

Other great highlights include meeting JG from Comicraft, meeting DJ and all the guys from PopGun and hanging out with Joe Keatinge, talking about comics and cool stuff like that. It was also great to see all my school buddies, even some I hadn't since first year like Mike, Ken, Geoff, Erik, Shoop, Trevor, Slater and everyone else (sorry if I forgot anyone)

Some other quick cool stuff: Meeting Claudio from Coheed and Cambria again. The Yorick from Y the Last Man poster that kinda looked like me. Artsy Fartsy parties that I now know are a part of a whole different world. Getting my balls busted on a daily, almost hourly basis to the point where I dont know what is truth or fiction anymore. :D Some things never change about me.

It all ended pretty quickly, right about the time it seemed it would never end(if that even makes any sense). What a strange world, full of costumes and fans and people genuinely dedicated to make one genre the best it can be. Getting back to real life is like waking up from a dream or from some unconscious state.

Still feeling a little loopy after the trip. I had a moment the other night where my mind was willing to draw as I put all my stuff out, but then my body just had an epic fail and crashed on me. Gotta see if things are any different tonight.

I still have some pictures coming in, so I'll post those up as well later.

Oh yeah, and apparently, I won an Eisner award for my part in Comic Book Tattoo? Doesn't really count in the way that I would like it to, but nice all the same.
Posted by Andre Szymanowicz at 8:33 AM

Did you guys charge for sketches?

And congrats on finally meeting Allred - that was a long time coming.

Oh man I actually met Tony Lee and he was walking in our booth quite often (mostly to check out Nova, the girl who dressed up as Miki :P )

If I would have known who he was, I totally could have dropped your name!! Oh fer cryin out loud!

looks like you guys had a whale of a time at sdcc - jealous? moi? noooooooooo........next year buddy - i'll start saving now! in the meantime, hows your e'men issue comin' along? been hearing good things......

hehe that would be awesome to hang with you at the booth next year, Boo!! You can't be jealous of the devastating "Comic Con Crash" that totally ruins you for a week. :)

The issues are going good. Just handed in the last bits of 22 earlier this week and now its on to 23! Time is ticking!!

When is your issue coming out again?

Blair - October and November - if I get this current stuff done in time! Yeeks!!