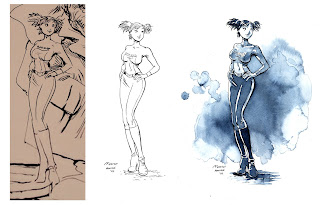 I really wouldn't be able to say enough about how Justin Norman(Moritat) has helped me these past years in trying to find my way in this wacky comics world. I know myself and a lot of other guys wouldn't have the gigs we have if it weren't for his kindness and advise. To top it all off, he is an amazing, amazing artist. He is the regular artist on Elephantmen, and also does work for almost every comic company out there, impressing people more with each turn.

Justin did this pencil drawing for a fan at the recent Windy City Comic Con. I just inked it and slapped some tones on it.

Some good news is that we will both be at the Baltimore Comic Con this October 10th and 11th along with the even more impressive and amazing Richard Starkings. I think that Sheldon Vella guy will be there too, but that's just because he happened to be nominated for some little award named after a guy named Harvey. :D So free sketches for everyone who stops by the Image booth. Should be lots of fun.
Posted by Andre Szymanowicz at 11:49 AM

Oh man, I love your watercoloring so much! Makes me envious

Aluísio Cervelle Santos said...
This comment has been removed by a blog administrator.
3:05 PM