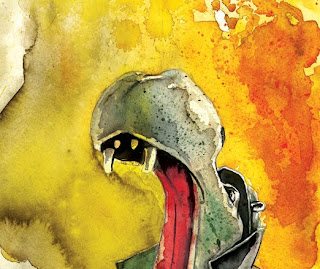 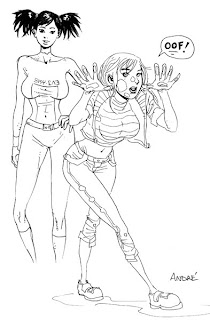 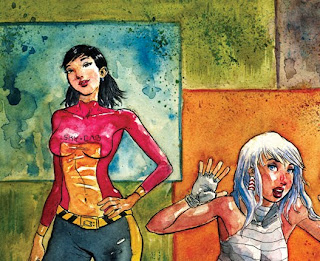 These are a few new pieces I did for Richard's Elephantmen Vol. 3: Dangerous Liaisons Hardcover coming out in April. The images are cropped but you can see the whole thing if you pick up the book.

The first one was really fun. It was originally drawn by Shannon Wheeler of Too Much Coffee Man fame. I simply slapped some watercolor on his already kick ass wash of Hip Flask drinking coffee.

The second one was originally going to be just watercoloring a sketch I did at SDCC 09, but I updated it a little. Those sketches are done in like 10 minutes or less so I think the book deserved something more elaborate.

And hey, the lack of updates just means I'm working on good stuff, not that I am playing video games. Nobody asked that, but I just thought you should know, ok?
Posted by Andre Szymanowicz at 9:44 AM

that top Hip is nutz - gimme the rest!

i also love the cute star wars sketches below - i'm thinking druillet, moebius or b.w.s. might be lurking in your subconcious...

It is my first time here. I just wanted to say hi!