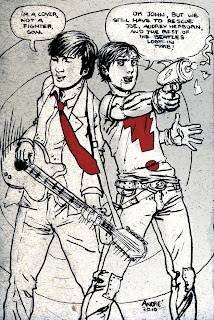 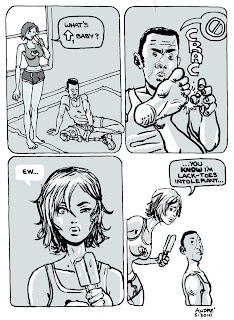 A Madman fan art and a King City fan art comic. Brandon put the comic up on his livejournal, which was very nice of him to do.

Been getting the bug to make comics really bad lately (my own comics, I mean). They are getting made, (Sushi Nachos) but it doesn't seem to be happening quickly enough. This feeling only seems to happen when such a thing is impossible, however (Spirit deadlines). That's the way this crazy universe works though.

One other thing I forgot to post up here was the interview I did with Mike Allred (creator of Madman, Red Rocket 7 and lots of other stuff). So, courtesy of One Shots Presents, here is me interviewing him at San Diego 09.
Posted by Andre Szymanowicz at 9:16 AM